Iranian film scholar Hamid Naficy has been writing about the diaspora in filmmaking, exiled and national cinema (especially Iranian cinema), and accented cinema practices for fifty years. While Naficy has presented his own research countless times throughout his career, he has also spent a great deal of time as a spectator in such events of academic presentation, a critical ritual of the western education.

Most attendees listen attentively, or perhaps scribble notes on the subject, preparing for a post-presentation dialogue, but Naficy’s way of internalizing these lectures is to draw caricatures of the people speaking. Though he has no formal drawing experience, Naficy has developed a quirky style over the last half century. When creating these drawings, Naficy constructs more than just a caricature of the speaker, he also often incorporates aspects of what the speaker is saying into the drawing. Sometimes the speakers’ topics are represented through aspects of their environment, sometimes as a cyborg hybrid, but all techniques are utilized by Naficy to create a visual personification of his subjects. Naficy states that drawing in this way helps him internalize the lecture, to “see” it.

Lines of Exile takes a series of these drawings and animates them to tell a story of Naficy’s education, but also illustrates an evolution of critical theory over the last half century. The drawings already function as a kind of index of cultural evolution, and this film intends to then draw out and expand on this quality. The film also acts as a love letter to the western education tradition, with all its imperfections intact. Lines of Exile will preserve the loose quality of Naficy’s drawings, while finding a home for them in that temple of the western tradition, a lecture hall. 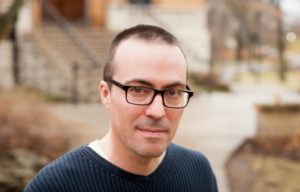 About Director
Eric Patrick’s films have received a Guggenheim Fellowship and received grants from The NIH, The Texas Filmmaker Production Fund, The New Mexico Arts Division, The Chicago Digital Media Production Fund among others. His work has won over 100 awards, including awards from The South by Southwest Film Festival, The Ann Arbor Film Festival, L’Alternativa, and the Black Maria Film Festival. He has screened extensively both domestically and internationally at festivals, museums and on television. He is currently an associate professor at Northwestern University.