One more night, Antoñete stays at home alone as his father is working.
Everything looks normal, until someone knocks on the door and to his surprise, no matter how much he runs, nobody is ever behind the door. 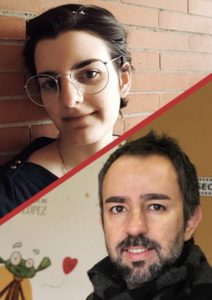 Animation director, animator and scriptwriter of the short film VillaOlvidada The Forgotten Village.

He also worked as inbetweener in cartoon series broadcasted on TV and in the acclaimed film Arrugas (winner of two Goya awards).